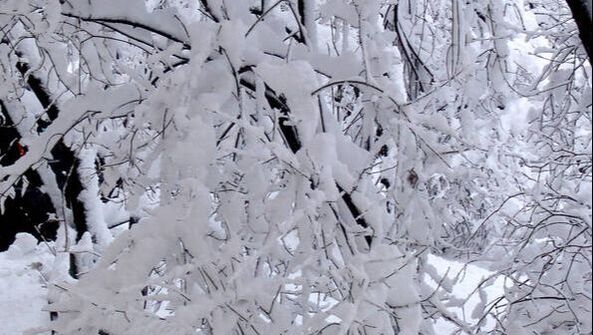 THE WEIGHT OF EXPECTANCY

Pipes banged and hissed as I heard the last of my heat fading away. The wood furnace was losing pressure fast and I knew soon there would not be enough water in the pipes to circulate heat, plunging the house into coldness. I was already wearing three sweaters — the outer one stretched tight by the multiple thick layers over my stomach. I had been without electricity for five days. Outside, I could hear the trees snapping and squealing at the weight of the ice frozen thick on their limbs. I jerked awake throughout the night, alert to crashes that may or may not have happened.
​
The kind voice on the phone from the electric company said they hoped my lights would be back on tomorrow, or maybe the next day. The man at the highway department said they hoped they could get up my way soon, to clear the downed trees in the road that leads up the hill, but they were still working down in town. So much hope in the world, it could break your heart.
“Please hurry,” I said, hating the whine I could hear in my voice. “I’m having a baby.”
“Right now?” the highwayman said, panicked.

I considered several responses; what I said instead was, “Soon.” Then, not wanting to panic him any further, I added, “I mean, any day now.”
“We’ll get someone out there right away,” he said, sounding only slightly less shaky than before. If only I could always have the power to make things happen so quickly.

I took him cigarettes. I had read enough trashy novels and seen enough B-movies to know that cigarettes were a helpful thing to have in jail, even though Kevin himself did not smoke. He had a long scratch along the side of his face.

“Making friends?” I asked. “You don’t want to know,” he said, twiddling an unlit cigarette in his hands. I had wanted to sneak something in with the cigarettes, some Valium or something, but in the end I was too afraid and shook nervously the whole time the guards looked over my carton of menthols.

I could have said I did want to know, but he was right. Kevin was only five-seven and quite pretty, fine-boned and fair. I could guess what he was spending his nights doing, or at least his showers. “I can bring more cigarettes next time,” I told him, thinking that maybe he could bribe a large friend.

“Are you trying to convince me to start a bad habit?” He tried to smile, but his face must have hurt because it only worked on one side. “As if you need any others,” I said, but I could see he wasn’t in a joking mood. He was six months into a one-to-three-year sentence. It was only pot and some ecstasy, but it was his second offense and the judge wasn’t amused anymore.

“How are you doing?” he asked, looking at my stomach. “Fine,” I said, because I had to. I couldn’t tell him about tossing logs down into the basement because they were hard to carry around my protruding bulge, or how cold it had gotten during the nights when the fire went out, to the point where I could see the cat’s breath. The little house we lived in was losing its battle with the elements, and I was too slow to be much help in the fight. I told myself I was emotional because of hormones.

When the visiting hour was up, the guards didn’t force me out as roughly as they would have another visitor, a concession to my condition. “Buy yourself some protection,” I told him. “I don’t want to see you all messed up next time.”
“I’m already paying,” he said.

Six months later the same thing happened again. This time wet snow poured out of the April sky and blanketed the world in a thick, wet grasp. A crack shot across the ceiling of the living room and kitchen as the roof creaked with the weight.

This time, both the phone and electricity were gone. It was the day of his first parole hearing: he would be finding out if he could come home and when he tried to call me there would be the sharp, fast busy signal of a phone not in service. I’d never regretted the cellphone dead zone before now, and it wasn’t like I could drive into town with the snow.

The house, usually cozy and snug during the daytime, dipped into the upper fifties as I dragged wood in from the garage. I dressed the baby in all the clothes in ascending sizes that he had been given at his baby shower, the ones he was supposed to “grow into.” He was a nesting doll of cloth, sleeping in a playpen next to a tiny, borrowed kerosene heater. I watched him constantly with hawk eyes, worried that a spark would cause him to burst into flame.

I waited and paced with urgency as I wondered if he would be coming back to me. He had told me over a scarred table how he bought his freedom from the pack by submitting to one; he touched his son’s head for the first time in the glare of fluorescent lamps protected by mesh wire so that prisoners could not break the bulbs and use them as weapons during a riot. He would have carried the wood and shoveled a path for me. I remembered how when I realized I was pregnant, we snuggled warm in the bed in the next room against the cold, and he smoothed my hair and told me everything was going to be all right. I was waiting for him to follow through on that promise.
The electricity was still out the next morning. I knew when the phones were back on by his call.

Stephanie King is a past winner of the Quarterly West Novella Prize and the Lilith Short Fiction Prize. Her stories have also appeared in Loch Raven Review and Lumen. She received her MFA in Writing and Literature from Bennington College. She lives in Philadelphia, where she teaches writing and serves on the board of the Philadelphia Writers’ Conference. You can follow her on Twitter @stephstephking.