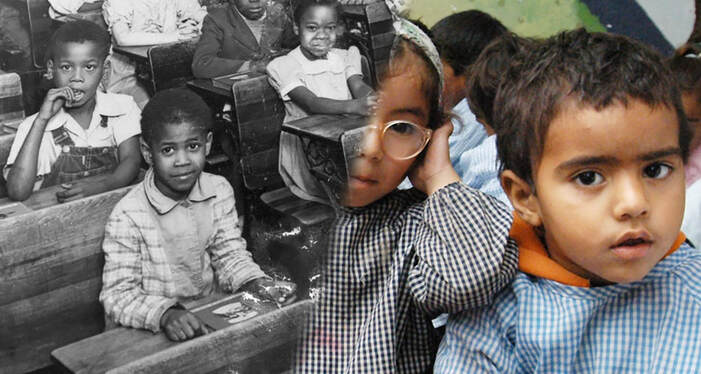 WHERE ARE THE WHITE KINDERGARTNERS?

On a sunny autumn morning, their little faces shine with hope. Shirts are neatly pressed and the pleats of skirts are a knife’s edge. It’s the first day of kindergarten. I slip their name tags over their heads, the lanyards getting tangled sometimes on the more elaborate braids. There’s always a nervous one, or a few whose parents had to leave to get to work on time, and I offer to hold their hands until it’s time to go inside. They struggle to form two straight lines, bouncing off each other like pinballs, but eventually they manage it, and I take that year’s picture, rows of promise smiling back at me.

Every year, I wait in vain to see a white face among them.

Everyone agrees that school segregation is bad in the abstract. Parents make these choices even after it has been shown that test scores reflect a child’s socioeconomic status and their parents’ educational level more than anything about school quality. Indeed, research has shown that integration has an overall positive benefit on test scores, raising the test scores of lower-income students with no detriment to others. This combined with social benefits such as reducing students’ racial bias and preparing them for future diverse workplaces means that the only “sacrifice” white parents would make is their own racial comfort. Parents claim to want to diversity, but their actions show that they mean only a carefully manicured sort. A professed commitment to the ideals of social justice and equality go out the window when parents run up against the reality of their own internal biases when choosing a school. Middle-class parents know how to work the system, and for white parents that means choosing whiter schools. In a gentrifying neighborhood, our class pictures should look like a pointillist pattern, not two opposite sets of dominoes. School segregation doesn’t happen by accident; individual choices add up to systemic inequality.

If parents’ school decisions really, truly, honestly had “nothing to do with race,” as they claim, then being accused of racism wouldn’t bother them. But they know, deep in their heart of hearts, that they looked at schools that were blacker and whiter, and papered over their racial discomfort with the excuse of “test scores” or “school culture.” They take pride in not moving to the suburbs while they scour GreatSchools and discard schools over a number, as if white flight from a school were more honorable than from a city itself. The way white parents on the playground say they can’t send their kids to the neighborhood school because of “the socioeconomics,” they might as well be saying “because of the [n-word]s,” because it comes out with the same tone.

Cities or school districts can be reluctant to address the issue due to pushback. Witness the hysterical response in New York City as their chancellor proposed something as simple as shifting away from a standardized test to class standing for admittance to the city’s select high schools: even professors — people in charge of educating students — are quick to denounce any plan to correct racial imbalances as “counting methods” or a “grand experiment.”  Other well-meaning efforts designed to ameliorate poverty, like universal pre-k, can’t fix the problem when parents are picking “feederpreschools” to ensure that their children will get on the right track, cementing their school choices well before kindergarten is even on the horizon. Unlike my two haphazard lines of kindergartners bumping into each other, their children are on a parallel trajectory, a railroad track of racism hurtling into the unseen horizon of a minority-white future, two tracks where their children’s path is specifically designed to never intersect with that of poor children of color.

When it’s finally time for my kindergartners to traipse into the school, I follow them inside, down the cheerful blue hallways festooned with brightly-colored encouragement. Inside the classroom, they struggle to shrug their backpacks off their tiny shoulders, and take their places among the jumble of books and colorful toys. Maybe one day, the weight on their shoulders will be only books, and not the weight of their neighborhood’s racial choices.